What's the Most Effective Less-Lethal Weapon?

The advice some instructors give about less-lethal self-defense tools isn't just cringe-worthy, it can also be downright IRRESPONSIBLE.

Take for example what many so-called "experts" say about the following devices:

"Carry a safety whistle to scare away a robber or rapist."

You're literally just wasting your breath on a whistle.

It might make a lot of noise but a whistle will physically do NOTHING to stop a violent robber from gutting you with a kitchen knife and stealing your phone and wallet.

"Use a stun gun because it'll work on anyone."

Stun guns are NOT foolproof.

Firstly, they require direct contact to deliver the electroshock.

That means you have to be able to touch the bad guy. And if you can touch him, guess what? That means he can grab, throw, punch, stab, and shoot you.

Secondly, not all stun guns are made equal.

Some companies hock models that deliver 16-million volts ... but have such low amperage (which is the strength of an electrical current and the more important measurement here) that they won't do more than just tickle an enraged thug.

And last but not least, electroshock weapons might not have any effect on a maniac who's hopped up on PCP or other drugs. He'll literally feel nothing!

"Pepper spray only takes one spray to bring down an assailant."

If only that were true all the time!

The truth is some people can power through a blast of OC spray, while others might be too intoxicated or high on drugs to notice its stinging effects.

Plus, depending on the model, pepper spray requires you to target the eyes, nose, or throat — hit a murderer in the chest and you'll only fuel his rage.

Oh, then there's the dangerous complications of weather.

And if it's windy, it could even blowback and hit YOU in the face — and in a fight for your life, the last thing you want to do is help the bad guy!

But a sturdy handheld flashlight can save your life — regardless of the weather or the bad guy's physiological state. 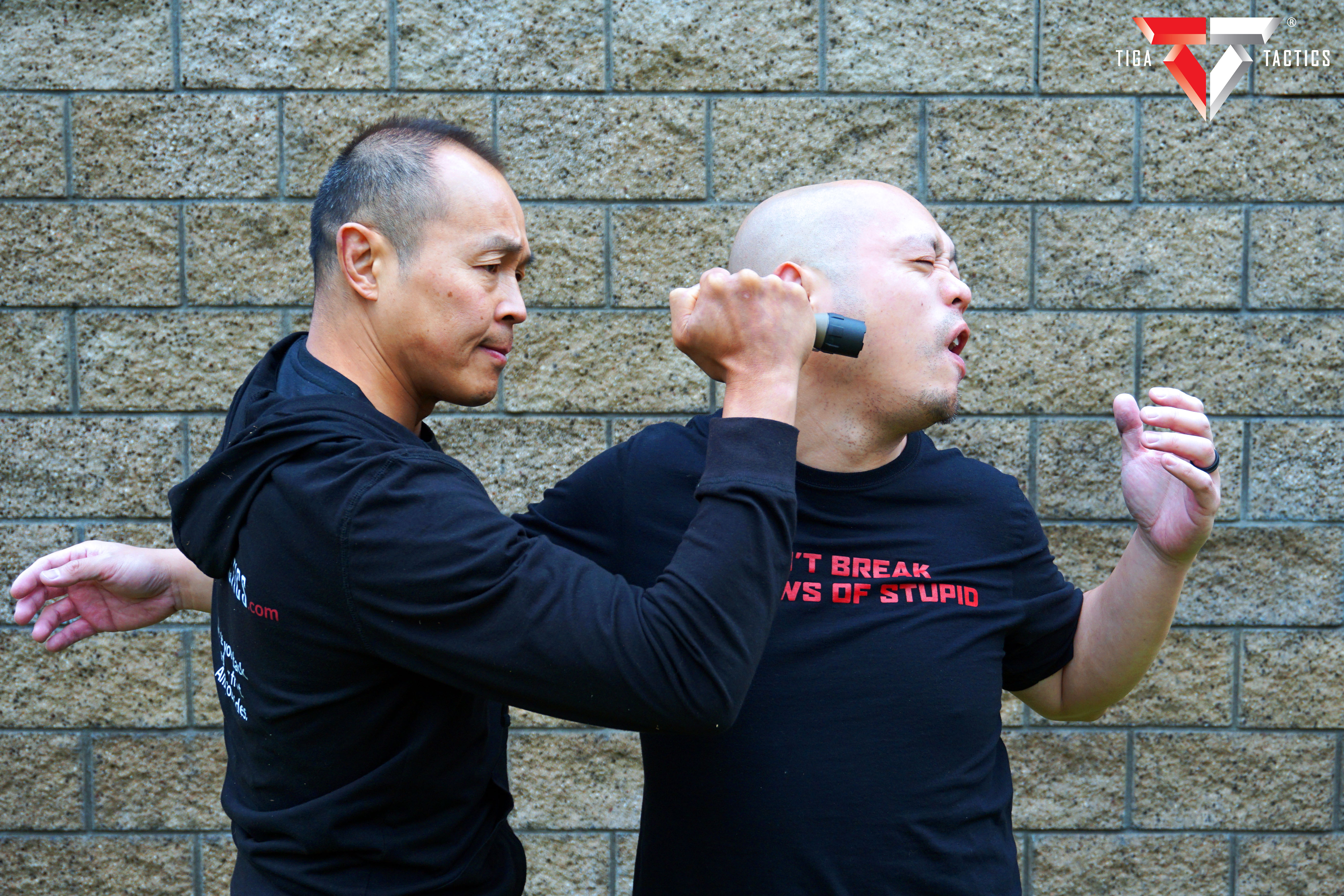 That's because a tactical flashlight is both a long-range "projectile" and a close-quarters combat weapon.

What do we mean? Let us clarify it's top BENEFITS:

1) Reach Out and Blind Someone!

It's a long-range "projectile" of sorts because you can "throw" 600 lumens' worth of white light to blind a bad guy before he even gets within 15 feet of you (unlike a stun gun, which needs to be deploy within arm's reach of a dangerous mugger or murderer).

And unless your opponent is a mountain lion with natural night vision, even a mid-level tactical flashlight will have enough lumens to temporarily blind any two-legged predator long enough for you to flee.

Even a low-powered handheld torch used in the dark can impair a goon's vision long enough for you to close the gap to finish the fight (unlike pepper spray that requires pinpoint accuracy and perfect weather conditions to work).

2) It's essentially a compact metal pipe!

Some critics say, "Well, flashlights don't work during the day." And to that we say, "Ha! Have you ever been hit with a flashlight before?" It's like getting smashed in the face with a mini metal pipe!

Most tactical flashlights are made out of aluminum or high-impact polymer — both of which make for excellent blunt weapons.

Hit a criminal anywhere with a flashlight and it'll hurt. Hit him in the right targets and you can break bones and even knock him out.

And the reason why they're such great weapons for close-quarter combat is that they're usually lightweight and compact enough to stick in your pocket. That makes them portable and more likely to be on you if trouble strikes.

And a self-defense tool is only useful if you can get it into your hand in time.

3) It's a Practical Everyday-Carry Tool

And perhaps the best reason to pocket a flashlight whenever you leave the house is because it ILLUMINATES.

And that can help even during the daytime. How?

Ever dropped an item behind a couch? Had something roll under your bed? Or maybe you've had to check under the hood of your car.

The main function of a flashlight alone makes it worthy of being carried as part of your daily loadout — and it's legal pretty much EVERYWHERE.

The fact that it's an effective improvised weapon that can both blind and beat a violent attacker makes it all that much more valuable to your personal protection.

That All Sounds Great, But the PROBLEM Is ...

"Where do I learn how to fight with a flashlight effectively? It's not like there's a flashlight martial arts school out there I can join."

That's where our new "EDC Flashlight" course comes into play.

It shines some much-needed light on an area of personal protection that's been kept in the darkness for too long.

We've melded our knowledge of flashlights and tactical firearms with a combined six decades of experience in martial arts, combatives, and combat sports to bring to you a practical and effective program that anyone — you, your kids, your grandparents — could learn today to help protect themselves on the streets today.

Here's a Glimpse of What You'll Learn in Our New 31-Part Program, "EDC Flashlight: Daily-Carry Defense Part I"™ ...

Still not enough? Here are MORE benefits to our online course:

And all those benefits are in just the FIRST 30 MINUTES of our program! Want more? You Got it! ... 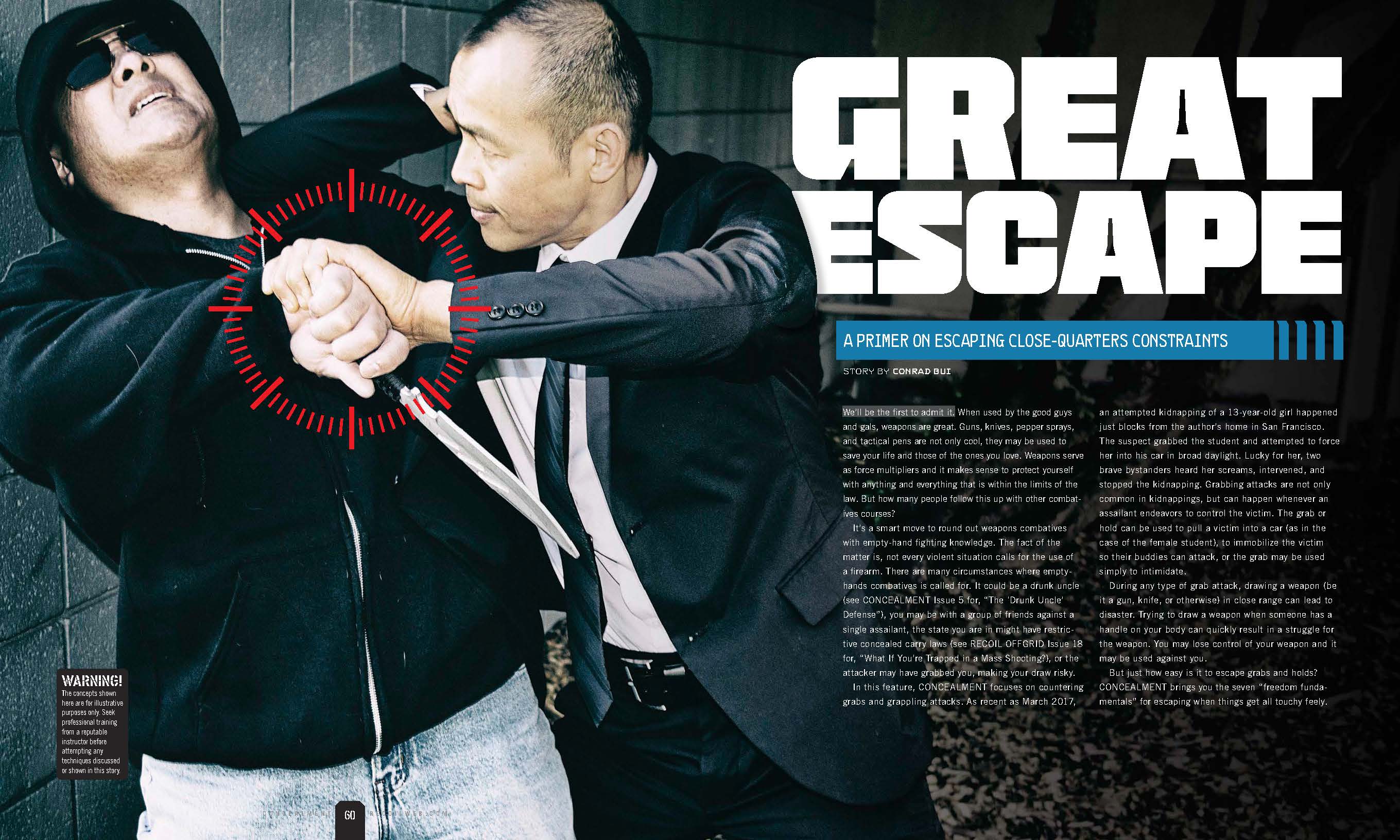 As a subject-matter expert on self-defense, Dr. Conrad Bui has been published in numerous international magazines.

Our co-founder, Dr. Conrad Bui, has been been involved in Kali (a deadly bladed art from the Philippines) since 1990, eventually earning the rank of guro (instructor).

Later on, he achieved certification as a senior instructor in both Silat Serak and Kuntao Silat de Thouars under legendary teachers from Southeast Asia who specialize in edged weapons.

Along with his advanced rankings in bladed combat arts, he is also a Muay Thai coach at World Team USA and a competitive black belt in Brazilian Jiu-Jitsu. 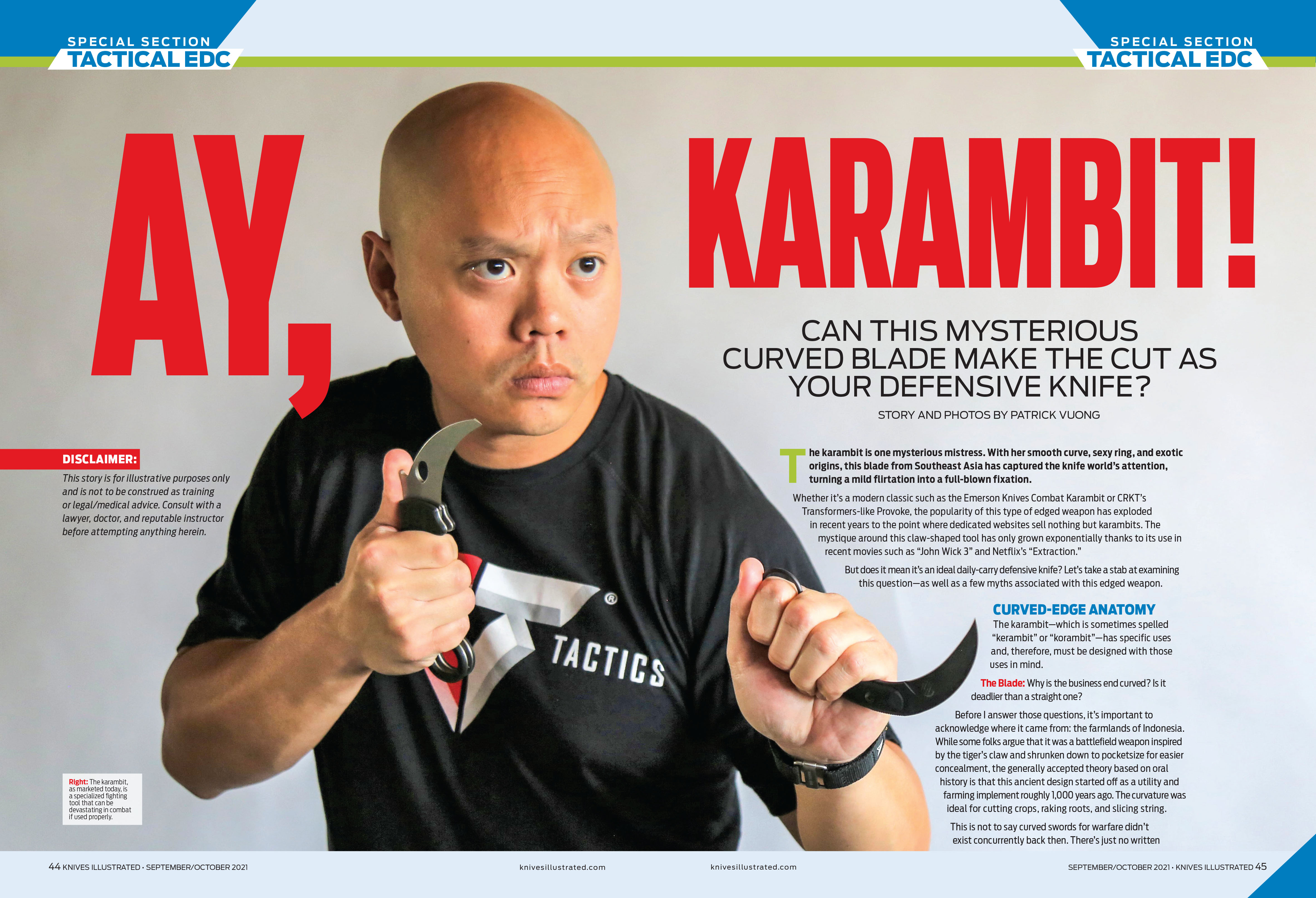 Patrick Vuong has written about knives, flashlights, and self-defense since 2001 in a variety of international publications, including Knives Illustrated.

His co-founder, Patrick Vuong, is an instructor in the bladed art of Pekiti-Tirsia Kali, which uses a wide range of edged tools, including knives and machetes.

He's also a black belt in Kenpo Karate and Southern Shaolin Kung, and is a certified handgun instructor.

If that weren’t enough, he's also served as the senior editor of Recoil Magazine, where he had the honor of studying under some of the country’s elite warriors, including current and former members of the U.S. Army Special Forces and the U.S. Navy SEALs.

And as a subject-matter authority, he's often asked by international publications like Offgrid Magazine and Black Belt Magazine to write about real-world combatives and self-defense. 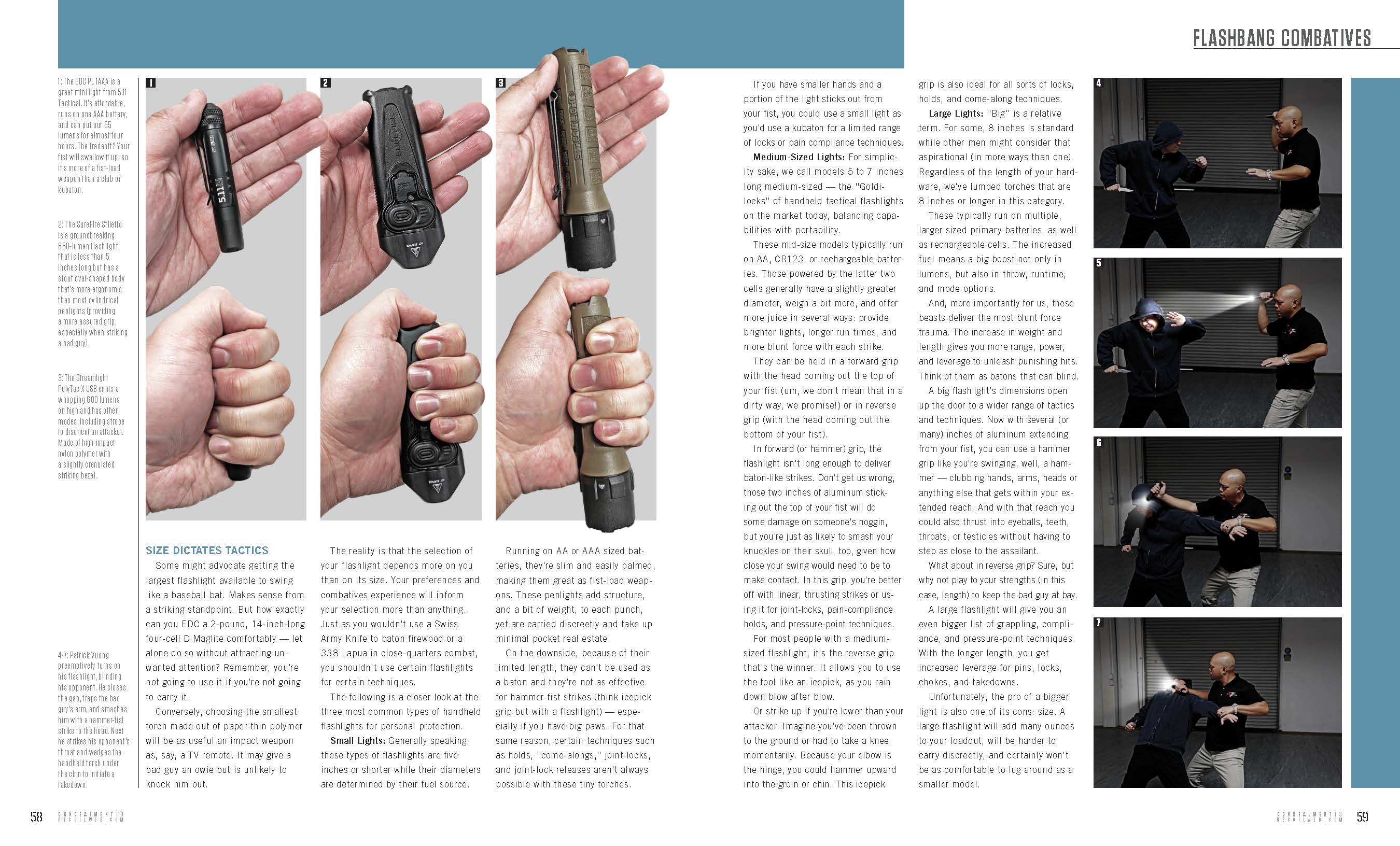 Patrick Vuong wrote a primer on using flashlights for self-defense in Concealment Magazine.

Together we have trained hundreds of students in the use of empty hands, dedicated weapons, and improvised self-defense tools.

With violent crime skyrocketing in the past three years, you just don't have that kinda time to learn how to safely and effectively carry, deploy, and use a flashlight in a fight.

So, to make sure you have everything you need to protect yourself and your loved ones, we're debuting "EDC Flashlight" — the first chapter in our new "Daily-Carry Defense" series.

And for a limited time, we're also throwing in $157 worth of free BONUSES for you!

Here's a look at the FREE bonus materials you'll get when you order "EDC Flashlight" today:

Here's a sneak peek at the "Flashlight Fighting" BONUS Program:

Because there's just SO MUCH we want to teach you, we've also jammed in the following in this 9-part BONUS:

"EDC Flashlight" bundled with all of these bonus materials would typically cost $307.

But today you won't even have to pay half that amount.

That's because, for a LIMITED TIME to help kickstart your training goals in the new year ...

We're offering "EDC Flashlight" for ONLY $67.

But, even without this massive sale, the bottom line is that you owe it to yourself and your family to have the knowledge, skills, and training you'll get from our home study course.

But, in case you still have any doubts, read what this world-renown martial arts master said about our co-founder: 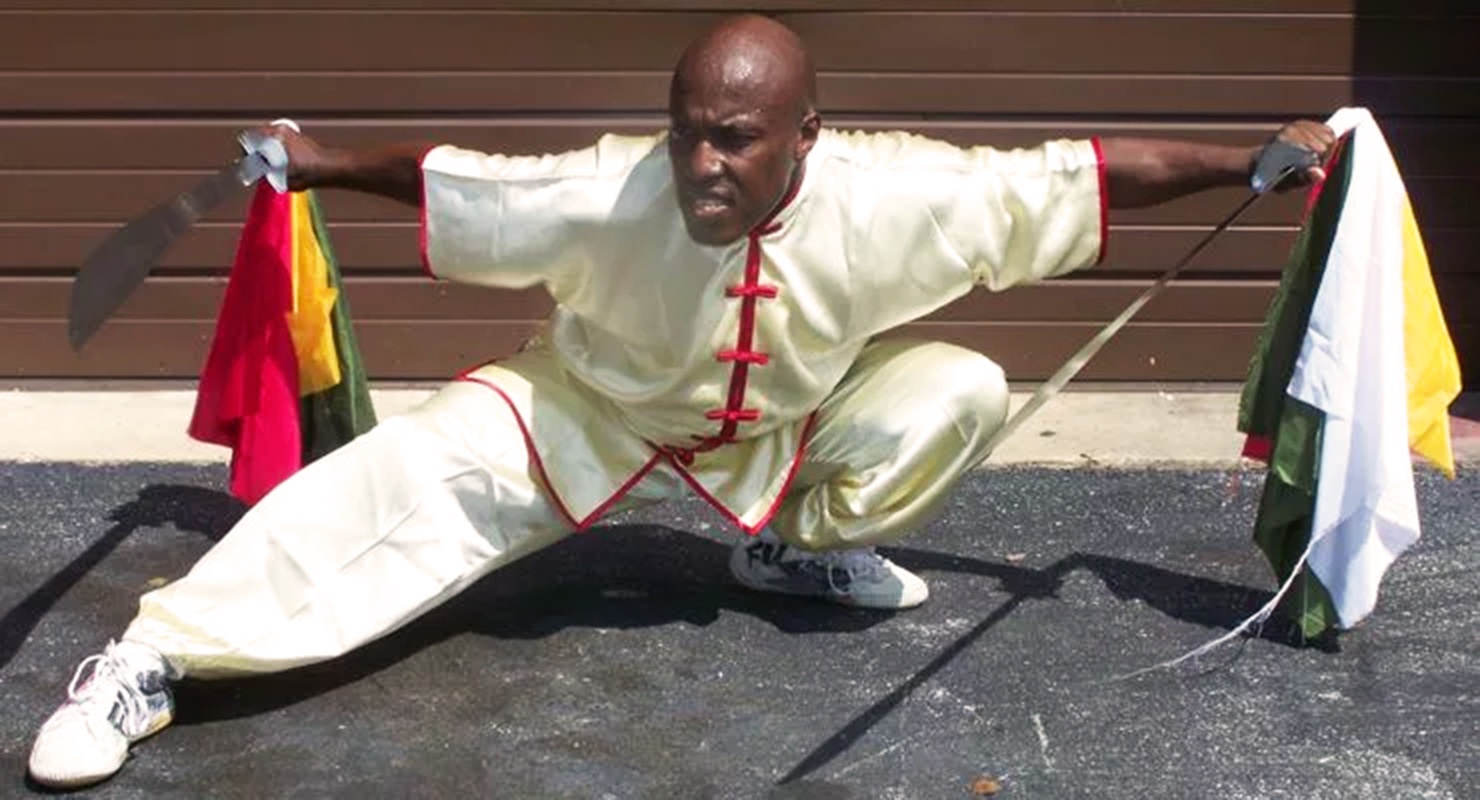 “Dr. Conrad Bui is one of the humblest martial artists I know. His experience as a reality-based self-defense instructor stands out above many. I recommend him to anyone seeking innovative training.”

Even if you plan to never step foot into a martial arts dojo or self-defense studio, you can still learn how to protect yourself and your loved ones with a tactical flashlight so that you aren't attacked by a violent robber in a dark parking lot or jumped by a burglar in the middle of the night.

The defensive mindset and skillsets you'll get from our “EDC Flashlight” program can help you get home in one piece.

And no doubt your loved ones will agree that a small investment of $47 is nothing compared to your personal safety.

Don’t like what you see? We’ll refund every penny.

That is how confident we are in knowing that you will LOVE the program and find it a valuable addition to your self-defense training.

P.S. — “EDC Flashlight: Daily-Carry Defense Part I”™  is a new course for folks who want to protect themselves and their loved ones but can only use a less-lethal tool. For only $67, you receive all 31 videos and bonuses (a package with a total value worth $157, including an EXTRA 9-part training program).

P.P.S. — This low price is ONLY available for a LIMITED time. After that, the price goes back up. Act now so you do not miss out. Click the red button below!

“I can say that the skills taught here were very much in line with my experience as a police officer. It can SAVE YOUR LIFE.”

“I liked how the course was practical and to the point. All techniques and methods were based in the reality of being attacked by a club-like weapon. Also, the drills are a great workout. The training was an awesome way to prepare for unplanned combative situations in the real world.”

"Self-defense shouldn't be limited to the 'best' of us, it should be for the 'rest' of us. So, whether you're in great shape (or not), you should still take the initiative to learn how to protect yourself and those you love — and Tiga Tactics is the BEST place I can recommend."

“Patrick Vuong and Dr. Conrad Bui, bring the course material in an easy to understand and fun manner. The two of them have an insane amount of experience and qualifications. As someone who regularly buys martial arts training content in digital format, this is one of the BEST ones I have seen.”
CLICK HERE NOW